No one is giving us a pray at Anfield tomorrow. Why would they?. Liverpool the new league champions are unbeaten in 56 home league games. Winning their last 23 in a row. So the Villa really has got nothing to lose. I think Dean Smith needs to let the shackles off and play to Villa’s strengths. If we try to sit back and contain Liverpool, then we might as well hand them the 3pts now. Villa’s best performances this season, have been when we have been on the front foot and given it a go.

The last thing I want to do is sit through another inept lacklustre 90-minute performance. I don’t think I am alone in wanting the players to play more attacking football. It’s an old cliché, but at this stage of the season, we have nothing to lose?. We might as well go down fighting than go down with a whimper.

Like me, I suspect the majority of the fan base is expecting us to get spanked. But no doubt once the match kicks-off you will have everything crossed. Probably watch the game from behind the sofa, and be praying we can come away with something. I keep saying it because it’s true, we have nothing to lose in going to the Champions and playing on the front foot. That said if we keep making silly defensive mistakes, then it makes no odds what we do attacking wise. I do believe if we can shore up our defence, then we have a real chance of staying up.

The last time Villa won at Anfield was in 2014, under a Paul Lambert’s team that finished the season in 17th. Which consisted of players many Villa fans deemed useless. We won 1-0 thanks to Gabby Agbonlahor’s 9th-minute strike. A young Jack Grealish was an unused substitute that day, and the Ashley Westwood & Tom Cleverley midfield partnership outwitted the formidable trio of Steven Gerrard, Jordan Henderson & Philippe Coutinho of Liverpool. No need to rub your eyes it true?. That season Villa also beat Liverpool in the FA Cup Semi-Final.

This victory gave Aston Villa ten points from their opening four league games for the first time since the 1998-99 season. Ironically Paul Lambert was sacked in February, Tim Sherwood took over, he changed the way we played because we had nothing to lose, and Villa survived by the skin of our teeth. What that result shows us is that regardless of the quality of the opposition tomorrow, Villa has a slim chance but only if we change tact.

Villa’s only two victories in their past 34 top-flight away fixtures came against Norwich in October and Burnley in January.

Jack Grealish has gone nine league appearances without a goal and only contributed one assist in those matches.

Liverpool’s only defeat against a side in the relegation zone in their past 24 league matches at Anfield came against Swansea City in January 2017. 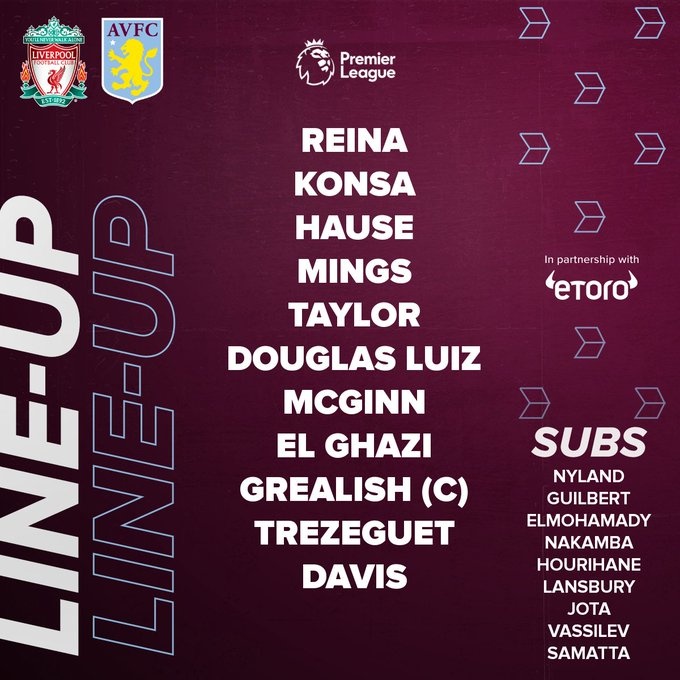 Nice post Begley.
As Muz says below the time to sit and defend & hope for a point was earlier in the season. Fact is had we done that Earlier on we might not be in this situation. There was some logic for approaching the restart with that keep it tight game plan but I think the west ham win now means we need as many points on the board as possible. We have in effect a free swing at it the next two games with no one expecting anything, surely we have to have a go.

the usual,we run out of steam and they had the subs to make it count.

If Taylor starts again,always goal from his made useless,jack misses decent chance

In fairness Taylor did okay, Mings was a little static for both goals.
Real issue is would Targett have been any better?
Said earlier I would have had Elmo, Konsa, Mings and switched Hause to LB.
Luiz played well again, just not sure why we didn’t bring Nakamba on as a reaction to the dream subs Klopp brought on.

its ok all,
weve only got man u next.

so far so good.

Jcv
Your Welsh mate will be defending Taylor on other blog

he was caught napping for that goal.

Any player want to score play villa or just against Taylor

Why have we not played like this all season , everyone putting in some effort

Yep, good 1st half, I do wish we could hold onto the ball better but I yhink 3 shots on target and defending well.
I feared the worst when Salah unmarked in the box in 1st 5 mins, but we are doing okay.
Would absolutely love us to get something out of this. Henderson & Firmino not playing they look out of sorts.