Villa v Man United at Villa Park, You have to go back almost 25 Years to when Alan Hansen once famously said: “you can’t win anything with kids” to find the last time Aston Villa beat the red devils in the Premier League at Villa Park. Unfortunately, the younger generations of Villa fans are still waiting to witness such an event. But while their wait continues, spare a thought for us poor sods who have had to endure and live through the nightmare.

Since that day, Villa’s as only managed to obtain five Premier League draws at Villa Park against Manchester United. It’s a shocking statistic, but regardless of that, Villa fans will still be hoping Dean Smith and Villa can end the red devil curse this Thursday. I suspect most fans would take a point now, given our record and precarious position.

I know they have been so rare, but if we can produce a similar type of performance we witnessed up at Anfield at the weekend, then we do give ourselves a fighting chance. Of course, there were always going to be inconsistencies in our play at the start of the season. I think we all accepted this probability, but I for one never anticipated just how long they would continue, or how rare decent performances would become. It does appear, players, gelling time is now something that occurs in front of the mirror and not on the training pitch.

Given what I have said above, it’s hard to believe in us suddenly turning our fortunes around. But stranger things have happened. We have five games left to achieve survival. Three of those are at Villa Park, all five games are winnable, and as you’re only as good as your last performance, it should be a walk in the park. But I won’t be greedy, 7 points, two wins and a draw should see us over the line.

Imagine beating the red devils, and how much of a lift that would give the players and the fan base. I can assure you I have not touched a drop, I’m just dreaming, but should Villa happen to beat Manchester United this week. I will need to get the fermenting bucket out earlier than I anticipated.

hi lads,
i think the blame has to be shared out amongst 3 people.
Perslow for giving DS a 4 year contract instead of his cards.
Suso for a terrible set of signings in the summer bar one,and thats luiz but there again he is playing well to get away.
and DS for his signings as well.bar Mings and even he is shell shocked at this time.

apart from norwich,we were the next worst squad to play in the prem this season.
now how much that is down to the players,or DS being stubborn is anybodys guess.

for me,i can only see a whole new set up being put into place yet again.
time for Rafa.
some even knock him,but the liverpool and newcastle fans rate him,so he cant be that bad a shout

Keep the faith folks honestly it gonna be ok there are still 12 points up for grabs and we won’t have to play Liverpool or Man u in our last four games.

fuck var that was never a pen 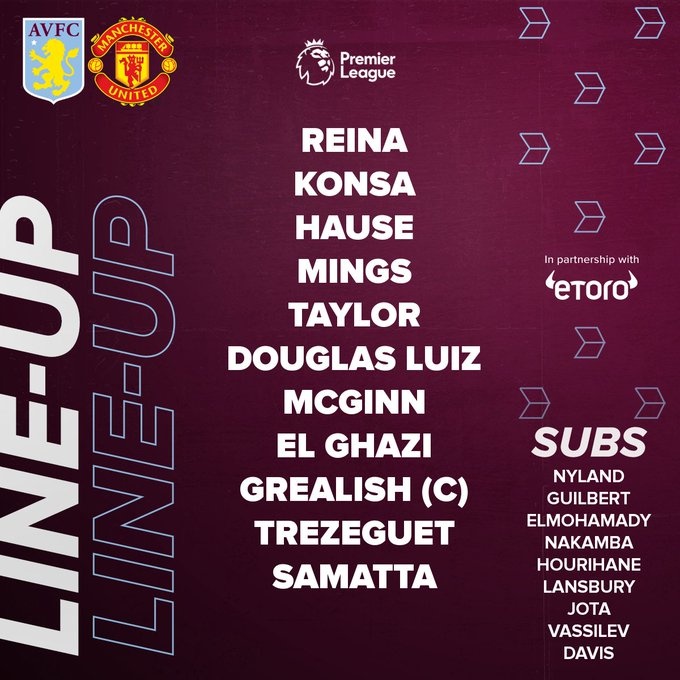 The Reds will line-up as follows:

At least Norwich beat city and gave it a go ,we rolled over Everytime a big side came to town

Every match was a whimper,how many points have we lost from leading,one draw against too half sides ,yellow belly’s comes to mind

WTF was Mings doing gives the ball away, then gets back but doesn’t go out to the player.
Game over.

re the pen.
it doesnt matter anyway,we just cant score goals.
and lets not forget the goal that was denied sheff against us.

dont mention goals mate,weve forgotten how to score them

yes because our defence is crap.lol

i can see these owners doing the same as lerner.
he spent a load of money.and then got fed up,got as much as he could back and sold us.

it will be a few years before we play them again

if DS is still here next season i think i will throw the towel in.
im getting too old for this shyte

not without Jack to bail him out like last season

Seen couple post we spent 150m on reserve players, unbelievable
Heaton 3 Rd choice at Burnley,targett wasn’t in soron 1 at team ,Ming’s likewise,house,konsa from midtable championship, 60m there,never mind how much for drink water wages for 7 months at over 50 k a week all down to Smith not suso

Not while he has got an arsehole

well thats another nail in the coffin.
night all.

hi lads,
i think the blame has to be shared out amongst 3 people.
Perslow for giving DS a 4 year contract instead of his cards.
Suso for a terrible set of signings in the summer bar one,and thats luiz but there again he is playing well to get away.
and DS for his signings as well.bar Mings and even he is shell shocked at this time.

apart from norwich,we were the next worst squad to play in the prem this season.
now how much that is down to the players,or DS being stubborn is anybodys guess.

for me,i can only see a whole new set up being put into place yet again.

the sooner the better mate.

not watching but going by the comments on the blogs,it seems that every man and his dog are against us

For the 1st time in my life villa are on and I am sitting watching CSI Miami,just had quick look on fb to see how it’s going and all I see is whinging about var,3weeks ago it saved us,but for the live of God Smith sending a 2 man midfield for 2 ND match in a row is stupid as is the thought of giving him more time
He said we weren’t fit enough before lockdown ,we said last November,when trez was scoring he never started him,puts jota on v Chelsea and Liverpool not sheff it’s or Newcastle,Smith is worse than Bruce ,never did I think I would write that about another villa manager

FM we just never get a break do we, playing reasonably well, hit the post, Grealish can’t bury a sitter and terrible penalty decision given.
Come on Villa !

We needed Davies up top didn’t we?

Lol
Just praying for a miracle,

hi all,
same old again apart from samatta for davis.
DS just hasnt got a clue.

Just think Davies is essential to us holding the ball up to relieve pressure. I would of thought this exactly the game to want to be able to do that.
Losing patience fast with Smith.

hi mate,
only just losing patience with DS,
i lost it months ago.

wonder whats happened to Begley,
i hope his familly are ok.

I sent him an email but had no reply

could be a night for the under dogs then lol

hi all,
well that looks like the final nail in our coffin.
at least watford changed their manager to give them a chance.
whilst we fiddlled as rome or villa park burned to the ground.