By the time we play West Ham on Monday week. Everyone else will have already played. And given the fixtures, of those around us, there’s a good chance a win will almost certainly see us climb out the bottom three. I do feel we must get something from the West Ham game, With Arsenal up next.

We then face Burnley and Norwich, before we go into another International break. So between West Ham and then, It’s an excellent opportunity to accumulate some much-needed points before we go into a more difficult fixture period.

The trouble is, It’s an unforgiving league, no one rolls over, and every game is difficult. So were not guaranteed points from West Ham or anyone else just because we’re at home. But I do think we can burst West Ham’s bubble, and also make it an unhappy return for an old favourite Robert Snodgrass. The International break has given us extra time to prepare, and that’s the only upside of having this international break.

Simply Not Ready For Promotion

I think promotion as tricky as it was to obtain, was the easy bit. On achievement, It created an enormous task that we were not ready for, and our results to date show this to be the case more than it just being a hunch on my part. All promoted clubs face challenges, but I think the re-build we underwent has exacerbated ours. And that’s why it’s no real surprise to me where we sit after four games.

August will not define our season, and In time, we have to believe the players will adapt, and the results will follow. That may not be for some time yet, but for the time being, we have to try and take whatever points we can get.

There’s been plenty of talk about formation changes ahead of West Ham. I don’t think it’s quite as simple as just changing formation, and I don’t think it would matter what formation we play right now. I believe the results would be similar. It’s more about the players settling and adapting to the league.

Expectations from the Aston Villa fan base will always be high. Because our clubs rich history is too great for us, just to accept mediocrity. But we are also a tolerant fan base that allows Managers time. We judge on performances and results. However, it’s not quite that simple this time around. Because of the colossal transition, Villa is undertaking while in the top flight.

It was not so long ago we called for changes at Villa Park. And I don’t just mean the removal of Mr Marmite, (Steve Bruce). And yet after four games, with a newly built side. More importantly, one that is in-experienced in this league. I sense the prophets of doom already starting to put a negative spin on things, with their doom and gloom analogies even though the foundations that are being put in place for our future success have barely got underway.

I believe we will come out the other side of this transitional period a better team, but we need to give time. And accept instant success does not exist and that losses will occur along the way. And that we could be in or around the relegation zone most if not all season. Finishing Midtable would be fantastic but equally so would 17th this season.

So I make no apologies for being behind my team and supporting the coach through an extended period, to allow him time to develop the team. For me, Smith needs this season, and I suspect the owners think so too. What did Christian Purslow say? “nothing happens overnight Dean Smith was the outstanding candidate, every single attribute that the owners and I had talked about, Dean had In abundance.

Morning all
Begley did you shit the bed 6.30 comment

The match yes i fell a sleep but was wise enough to record it so i have since watched it back.

I actually thought it was a good game for a 0-0, sure it lacked quality, but at same time they are an established PL club and they never really tested us, they also spent big in the summer, we never looked overwhelmed or out of our depth, or looked like relegation fodder.

Marvelous
Decent debut – very energetic got about the pitch well, did the basics right, and if i am going to nit pick just a few loose passes but no different to super jack on that score.

Guilbert/jota partnership worries me, unlike Guilbert, Jota as no pace, yes he’s technically good but he runs into blind alleys, Guilbert get caught out of position because he passes it to Jota and goes on a run only for jota to lose possession, it happens time and time again, against better opposition we will get punished. Guilbert needs to be more selective when he goes marauding forward Hutton got loads of stick for being out of possession.

It’s all to predictable at present – Jack needs to show what he about – NOT DOING ENOUGH to influence a game for me, he needs to take a leaf out of Super John McGinn game, what a player he is, lets hope he don’t get a serious injury.

Maybe it’s time to find away to fit Hourihane in, because without him our deliveries are shocking.

El Ghazi is a fool he never tracked his runner, and in same passage of play seconds earlier Taylor was back to doing what he does best but Mings was right to have a go at El Ghazi his failure to track back brought the defence under pressure, If i am DS i am giving El gHazi two weeks wage fine, for reacting the way he did.

Were work in progress it’s like looking at your child take it’s first steps and watching them grow – this rebuild is a massive job,

Fans
Having read across the boards it clear the fans do not understand the enormity of the task we face, At least the fans at the ground are fully behind DS and what the club is trying to build, quick fixes in the past accumulated in our downfall.

Fans on the boards can moan all they like for all i care, not sure they understand the word support. seriously after 5 games so much negativity – i here better words from the opposition fans about our team than i do from some of our so called supporters, it’s embarrassing.

The o/s as been all day for me can anyone else reach it ? – perhaps they are having a overhaul

its up but its slow as anything 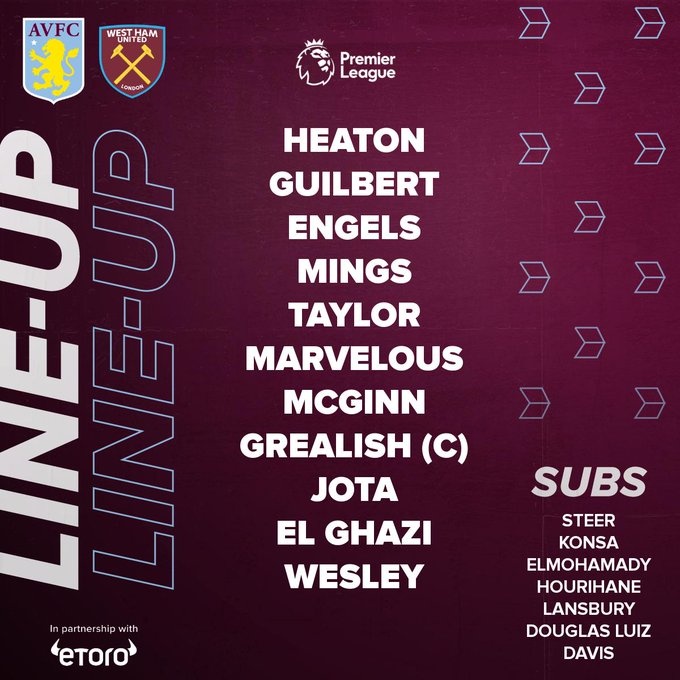 Muz
You think we should start Marvelous?
Its a Marvelous Monday ?

Looking forward to Mondays game, hope its fortress VP again and we turn over west spam.
A win would really relieve some pressure, one or two need a good game for some confidence. I’ll be looking for Wesley to run riot and our MF to step it up, i think if we can move the ball quicker and not dwell too much we should be capable of a win.
Not sure spam are that good defensively but they have a few dangerous players it should be a good test.
UTV !

Me too buddy, As long as it’s not a Villa v Forest scoreline ?
They deffo have fire power to hurt us, but i agree they are also susceptible to leaking goals,
I don’t think there anywhere near has good as Everton so i see no reason why we can’t win with us being at home under a full house.
I am looking forward to seeing Karma come back and bite Karren on her fat arse.

I’d still give that fat arse a good slap and ride in on the wave ?

Like the top of page utv icon BB?
Are you bored with the break yet ?

Cheers buddy
you don’t know how hard it was to keep sotc off it – i think the icon answers am i bored ?

‘And that we could be in or around the relegation zone most if not all season.’

My feelings exactly. This season, more than ever, I think the fans just have to stay behind the team and DS (and individual players) no matter what. It could make the difference between staying up and being relegated.
It’s going to be hard for all of us if we spend most of the season in the relegation zone but if we’re slowly improving and adapting (that means everyone at the club – DS, players, coaching staff) then hopefully we’ll pick up more points post Christmas than before.

Good luck with that, some are calling for a rethink of the system, before players have settled, 4 games in ?
I think a few of us are on the same page on here, its going to take time and some patience is required. Cut out one or two individual errors and we could easily be on double the points and we will get better with Smith’s coaching.
Right now not sure if the break, breaks, are helping or not.

We could do with a win Monday really (although I’m not suggesting it’s a ‘must win’ game!).

The best indicator for fans feelings come from those who attend games. And without a shadow of a doubt, the majority of fans are fully behind Dean Smith and understand how difficult this season will be. Lets just say it takes a longer time for the villa faithful to become disillusioned than it does for those who vent there frustrations and air there views online.

Remember back in 2015, the don’t take to your seat protest for the first 8 mins against Liverpool, that came from online blogs and even with all the publicity it generated only about 150 fans took apart, and most of them were standing in the concourse when the game kicked off.